Two of Welsh rugby’s most famous stars have teamed up with Celtic Pride to raise money for the Royal Welsh Agricultural Society (RWAS).

Some 190 guests gathered for ‘An Evening with Dan Biggar and Phil Bennett’ at the fundraising event organised the Celtic Pride Premium Beef & Pork Partnership.

Carmarthenshire is this year’s Royal Welsh Show Feature County, and Castell Howell’s Managing Director Brian Jones has the honour of being the Show President for 2017.

Said Brian Jones, “The Royal Welsh Show is an important showcase of all that is good in Welsh agriculture and rural life. We have an ambitious fund raising target and we thank the team at Celtic Pride and their farmer members for their support in helping us meet this goal.

“There is a close link between agriculture and rugby, and Dan is very supportive of Welsh agriculture and premium Welsh meat. We trust that his tour to New Zealand will be as rewarding as Phil Bennett’s Lions tour of South Africa in 1974!” 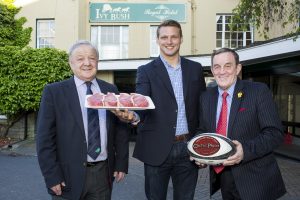 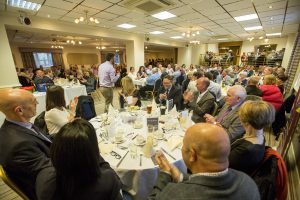 Celtic Pride on the Menu at Jamie Oliver’s Restaurant

Beef Quality at the Forefront
We use cookies on our website to give you the most relevant experience by remembering your preferences and repeat visits. By clicking “Accept All”, you consent to the use of ALL the cookies. However, you may visit "Cookie Settings" to provide a controlled consent.
Cookie SettingsAccept All
Manage consent

This website uses cookies to improve your experience while you navigate through the website. Out of these, the cookies that are categorized as necessary are stored on your browser as they are essential for the working of basic functionalities of the website. We also use third-party cookies that help us analyze and understand how you use this website. These cookies will be stored in your browser only with your consent. You also have the option to opt-out of these cookies. But opting out of some of these cookies may affect your browsing experience.
Necessary Always Enabled
Necessary cookies are absolutely essential for the website to function properly. These cookies ensure basic functionalities and security features of the website, anonymously.
Functional
Functional cookies help to perform certain functionalities like sharing the content of the website on social media platforms, collect feedbacks, and other third-party features.
Performance
Performance cookies are used to understand and analyze the key performance indexes of the website which helps in delivering a better user experience for the visitors.
Analytics
Analytical cookies are used to understand how visitors interact with the website. These cookies help provide information on metrics the number of visitors, bounce rate, traffic source, etc.
Advertisement
Advertisement cookies are used to provide visitors with relevant ads and marketing campaigns. These cookies track visitors across websites and collect information to provide customized ads.
Others
Other uncategorized cookies are those that are being analyzed and have not been classified into a category as yet.
SAVE & ACCEPT
Scroll to top